A Few (interesting, I hope) Facts on THE 3 by 3 Magic Square

…and how, ultimately, the Magic Square is related to the Tic-Tac-Toe game

Fact 1: There is really only one 3×3 Magic Square with the numbers 1 through 9.

We will consider the Magic Square at the right to be 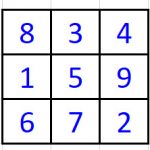 When we add each row and each column and each diagonal, we get 15. We will assume the sum must be 15

Let’s see why there is only one Magic Square:

Here is the process:

Q4: How do you make other 3×3 Magic Squares, using different numbers. 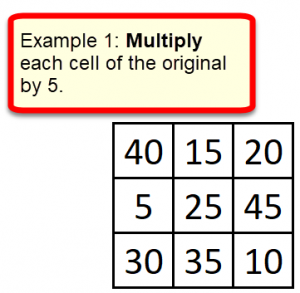 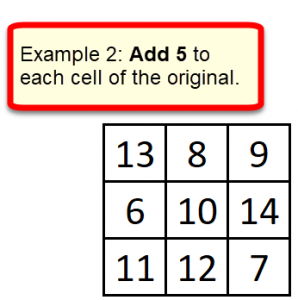 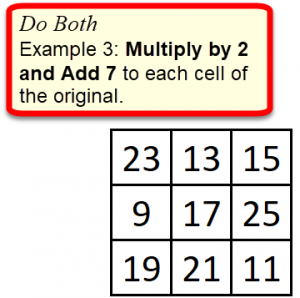 Q5: If each cell of a Magic Square is multiplied by M and then B is added, to make a new Magic Square, what is the new magic sum (sum of each row, column, and diagonal)?

Fact 5: If the original magic sum of a Magic Square is S, then the new magic sum (when you multiply each cell by M and then add B) is M×S + 3×B.

If you don’t mind a little algebra, here’s why:

You might check this by finding the magic sum in the three examples above.

Q6: How is the Magic Square related to the Number Scrabble Game? 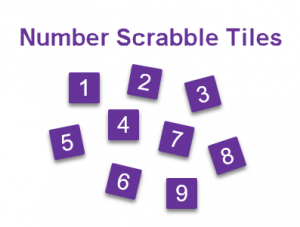 turns selecting numbers from 1 to 9 without repeating any numbers previously used.  The first player to get three* of their own numbers to total exactly 15 wins the game. (Sometimes number tiles are used to play the game.)

(*I believe the game can also be played allowing for any number of numbers to total to 15 [for example 4 numbers], but under these rules, a knowing player would never allow their opponent to win with 4 numbers.)

Fact 6: If the numbers (1-9) are placed in a 3×3 Magic Square, then the Number Scrabble game is equivalent to the game of Tic-Tac-Toe!

The reason for this is Fact 2. There are exactly 8 ways to combine 3 numbers to get a sum of 15. All 8 ways are represented in the Magic Square.

For example, in Tic-Tac-Toe, one player uses an o, which means that’s my spot (or my 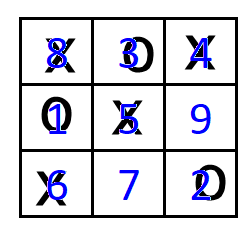 number in Number Scrabble). The other player uses an x to mark their spot.

Closing remark: It is useful to understand how  the game of Tic-Tac-Toe works.  (There is a short list of possibilities.) There is no winning strategy. There is a good strategy and there is a way to force a draw.  We’ll leave the details for another day. The aha moment for me was at a Junior High Youth Group meeting at our church (Iowa City, IA). We had 9 chairs put out, in 3 rows of 3. We went (in two teams) out an sat in the chairs (one by one).  Standing on the sideline I began to see how it worked.